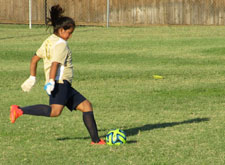 It has been revealed that the FA’s Women’s and Girl’s Programme exceeded its project target and helped nearly 21,000 14-25 years olds get into football in 2014.

Launched in October 2013, the FA worked with Sport England, the Premier League and the Football League Trust to provide grassroots football sessions for women and girls.

Sport England Chief Executive Jennie Price said: “We know women play less sport than men but most would like to do more. In fact, almost 120,000 women tell us that they want to play football. But the opportunities have to be right for those women to turn ambition into a reality.”

The programme is just one part of the FA’s strategy on growing participation figures for women’s football, in support of its vision to be the 2nd largest team sport after men’s football by 2018.

Kelly Simmons, FA director of national game and women’s football commented on the scheme: “One of our biggest challenges, apart from attracting new players, is retention, so programmes like this which run for long periods of time, will certainly help us tackle that and help women’s football to become the second most-played sport in the country.”