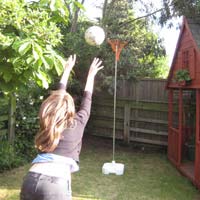 Halloween has only just gone by, but here’s a scary fact:

Christmas is less than 7 weeks away.

With that bombshell now firmly in mind, today’s product spotlight is a little more festive, showcasing an excellent value product that would make a perfect sporty gift this Christmas.

If you’re keen to get your kids out in the garden or see them more active, why not take a look at the Garden Netball Set?

The Garden Netball Set contains a complete netball post in a box. Easy to construct and dismantle, the set will provide hours of entertainment and netball shooting practice. Full instructions are included in the box.

Six individual tubular steel pieces slot together to form the complete upright. The base can be filled with either sand or water to create a weighted base that keeps the netball set stable. (Note: sand and water not included with the set!)

At 2.43m tall, the ring height is ideal for children under 9 years of age, however an additional extension pole can be purchased separately to bring the Garden Netball Set up to regulation height (3.05m / 10ft) for older children.

What’s in the box?

The Garden Netball Set makes an excellent present that helps netball players practice their shooting skills. Best suited to garden use, the set is an affordable alternative to netball posts with single piece uprights. Combined with the additional extension piece, the Garden Netball Set can be fun for all ages.

For more information on the Garden Netball Set, or any of our other netball products, contact us on 01858 545789.